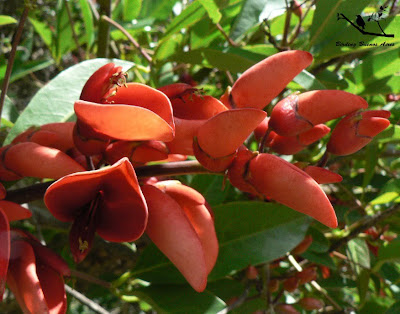 The flora of the area is also very diverse, mainly because of the diversity of biomes, which are the same mentioned before. Most of the flora in the natural reserves and wild areas is native from here, but there are also many species of exotic plants and trees that were introduced by humans (both intentionally and by accident) and are now a main concern for the conservation of the original ecosystems.


Here is a mention of some of the most remarkable species:

Herbs: This kind of plants is very representative of the prairies, been the Pampas Grass (Cortadeira selloana) one of the "symbols" of the Pampas. 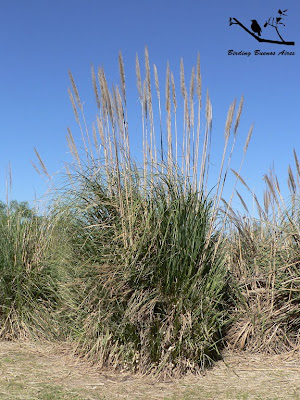 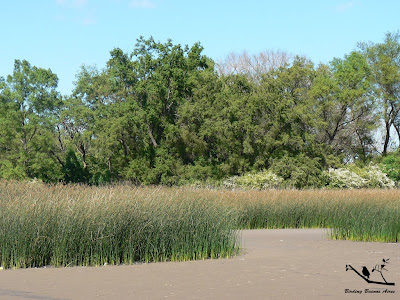 Aquatic plants: These plants are common in the lagoons and shallow shores of the rivers. Some of them are floating plants that sometimes create small floating islands which, by sedimentation of dust particles, constitute a real soil where other plants can grow (even trees). Those islands function as a transport for flora and fauna (mainly invertebrates as butterflies, but sometimes even vertebrates) from northern latitudes to Buenos Aires area. The most popularly known species is called “camalote” in Spanish, the Common Water Hyacinth (Eichornia crassipes), which is abundant here. Other common species are the Duckweeds (Lemna sp.), the Water Lettuce (Pistia stratiotes) and the Water fern (Azolla filiculoides). 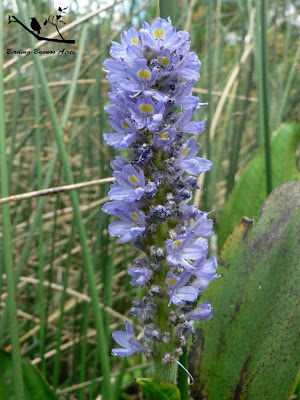 Terrestrial ferns and orchids: There is a remarckable diversity of this kind of plants, from which the most interesting are the ferns like Thelypteris riograndensis, Blechnum auriculatum and Rumora ariantiformis. These plants grow in shady and humid areas of the riverside forest and the most humid parts of the espinal forest. Other plants that grow in the same kind of ecosystems are the terrestrial orchids, such as the rare Cyclopogon elatus. 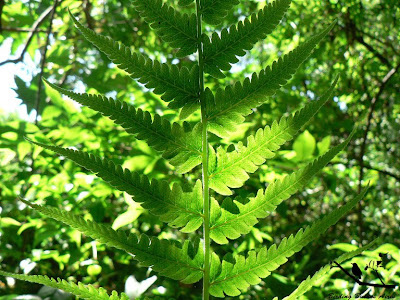 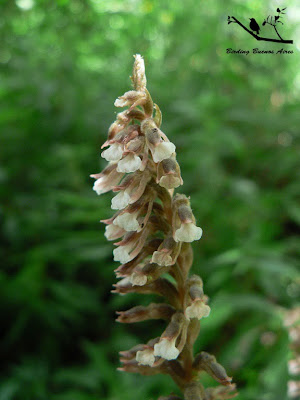 Trees: The two main ecosystems with trees in the area are the riverside forest and the espinal forest. The espinal forest in Buenos Aires in conformed by a main species called Tala (Celtis tala) and some others such as the Espinillo (Acacia caven). The riverside forest is the most diverse on species, with many representatives of the Paranaense rainforest (the subtropical rainforest that constitutes the "frame" of the Iguazu falls, in the Argentine province of Misiones). Just by the margins of the river there are three main species that use to create monospecific forests beneath the riverside forest assemblage: the Cockspur Coral Tree (Erythrina crista-galli), whose flowers are the National Flowers of Argentina and Uruguay; the Humboldt's Willow (Salix humboldtiana), one of the tallest trees in the region; and the River Alder (Tessaria integrifolia), with its particular shape. 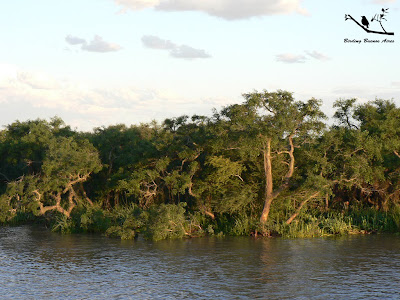 Cockspur coral tree (Erithryna crista-galli) forest in the margin of a river, in the delta of the Paraná - Photo: Marcelo Gavensky

Other species of the riverside forest are part of a diverse assemblage, that is home for the highest biodiversity of Buenos Aires province. Some of them are the Timbó (Enterolobium contortisiliquum), very representative of the Paranaense rainforest; the Ombú (Phytolocca dioica), a large plant that looks like a real tree; and the Coronillo (Scutia buxifolia), the main host plant for the caterpillars of the southernmost Morpho butterfly species. 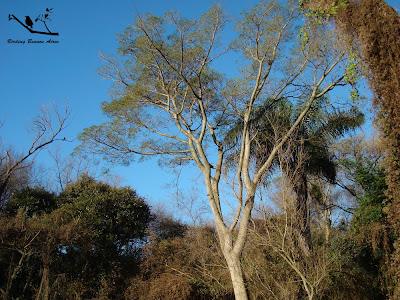 Finally, two species of this ecosystem (the riverside forest) deserve a special mention: the Queen Palm (Syagrus romanzoffiana) and the Higuerón (Ficus luschnathiana). The Queen Palm, or "Pindó", was a symbol of the area, been such a common species in the past in some areas close to where is now located B.A. city, that the Spaniards named one of the main rivers of the region as "Paraná de las Palmas" (Paraná of the palm trees). Almost all of them were used for the installation of the first telegraph system of Buenos Aires city, in the beginning of the twentieth century. Nowadays it's still findable but in a very few quantity. 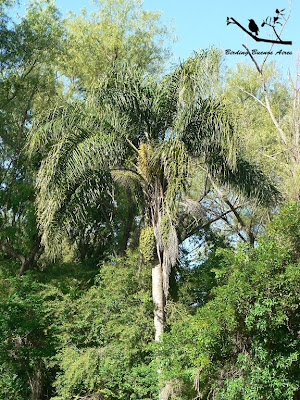 The Higuerón tree, or "Ibapoy", is a kind of Fig tree, and is very common in some areas not too far from the city, such as Martín García Island. It grows high on other trees, where it reaches better the sunlight while its roots grow down towards the floor. Once they reach the floor, the Fig tree can grow easier and even faster, and its roots start covering the surface of its host tree, suffocating it to death. Fig trees are very important in their area of distribution (mainly rainforests all around the world, with many species) because of their fruits (figs) which constitute an important source of food for a huge diversity of animals. 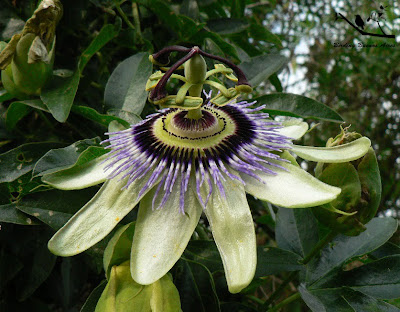 Climbing plants and lianas: These are common in the area, especially in the riverside forest. The Blue Passion flower (Passiflora coerulea), locally known as "Mburucuyá", is very representative of the area. It is a close relative of the Maracuja (passion fruit) plant, and it is also an important host plant for the caterpillars of helicon butterflies. There is a common species of climbing plant whose origin is subject of discussion between experts (some believe that is native and some that is exotic), because of its huge area of distribution in the continent: the Messina Creeper (Ipomoea cairica). It has beautifull bell-shaped blue/violet flowers. 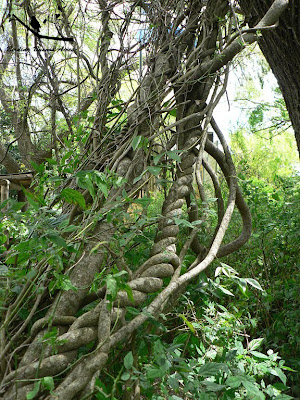 There are also some species of lianas that remind us the subtropical origin of the riverside forest. Some species to be mentioned are Metastelma diffusum and the large Canavalia bonariensis. 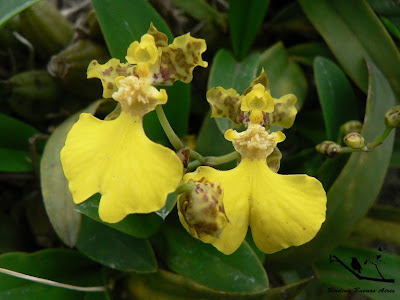 Epiphytes: The epiphytes are plants that live attached to trunks and branches of trees, absorbing moisture from the atmosphere (they are not parasitic). They are very common in the forests of the area and even on the trees of the parks and streets of the city. The best place to see these plants is the northern area of B.A. and Gran Buenos Aires (especially in the district of San Isidro) with some very remarkable species like the southernmost epiphyte orchid in the continent: the Dancing-lady Orchid (Oncidium bifolium). Likely to be the commonest epiphyte in the area is the "Clavel del aire" (Tillandsia aëranthos), member of the Bromeliaceae order. Finally there is a species of Epiphyte Fern whose foliage is not composed as most species of ferns, but simple-shaped: Microgramma mortoniana. 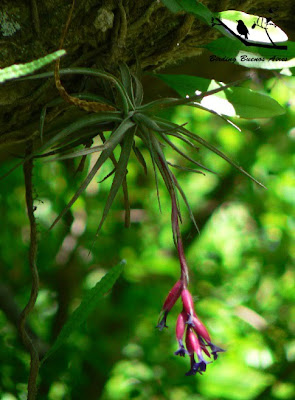 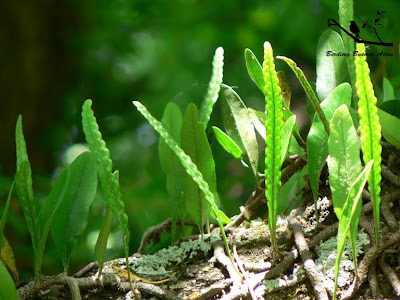 The exotic species in the area of Buenos Aires are many and some have become a plague, invading the native ecosystems. Some of the most invasive to be quoted are the Persian Lilac (Melia azedarach), Glossy Privet (Ligustrum lucidum) and the marsh plant Yellow Iris (Iris pseudacorus).